Playing on some popular superpowers like the Green Lantern’s light, Big Bang Comics features a bombardment of original superheroes with unique powers of their own and background stories in the classic comic book style.

Their website Knightwatchman says that Ecker was one of the original founders of Chicago’s NOW Comics and at his suggestion it pursued licensed titles like Astro Boy and Speed Racer to add to their publishing roster. The site continues saying he worked as a freelance artist in advertising for Curious George and Cap’n Crunch. Ecker’s extensive work accomplishments widens to when he worked as a ring and on-air announcer for C.I.W.A. (Central Illinois Wrestling Academy) Pro Wrestling and on the Power Slam pro wrestling television show in Indiana.

Big Bang Comics’ concept of newly created “old” comics first appeared with superhero, Knight Watchman in 1993 and in 1994 BBC officially debuted as a series. The majority of the main cast of characters in BBC were created or influenced by the founders.

Above: Some characters by other artists

“In my mind, he was always a bit more like an urban version of Lee Falk’s The Phantom, or the Marvel version of Daredevil than Batman. With the addition of a kid sidekick, access to advanced technology, and The Watch Wagon, he took on more Batman-esque notes,” says Ecker.

The producers set out to create archetypes instead of taking established characters and change their costumes. BBC’s The Beacon has gem originated powers that plays on the familiarity of DC’s Green Lantern’s light powers. Another BBC superhero, the Human Sub combines an underwater character like Marvel’s Sub Mariner or DC’s Aquaman with an android body like that of the Original Human Torch.

“Our inspiration was always to have a fully realised background for each character from their first story. I think we succeeded, and it is evidenced in the two volume, History of Bang Comics,” remarks the Illinoisan.

Readers may find the Knight Watchman quite similar to DC’s Batman but Ecker explains the inspiration for the BBC superhero comes from The Phantom. The main colour purple symbolizes royalty that could also extend to kings and knights. The blue and black colour scheme worked well with purple since Knight Watchman began life as an urban night patrolman. Ecker emphasizes that the chevron on the superhero is closer in shape and size to DC’s Superman.

Above: A Knight Watchman digital strip

“Of course on the surface there are similarities. There are very few comic characters one can create that aren’t at least marginally derivative of all the ones that went before,” says the 56-year-old producer. His example goes to German silent film The Man Who Laughs where actor, Conrad Veidt was “undeniably” the inspiration for DC’s well-known villain, The Joker.

In the past few years, superheroes have been trending such as Spider-Man, Superman, and Batman. Despite the popular heroes’ fame, Ecker says he thinks some long-time fans of the Marvel and DC comics have become “disenchanted with some of the portrayals” of some of their favourite superheroes.

“I think we present our material honestly, as documents that could have existed, rather than sly parodies making fun of the fans who actually enjoy vintage com[ic] stories,” says the producer.

Big Bang Comics‘ current comic book artists are Donnie Page, Sterling Clark, and Ecker himself. The co-founder says BBC is currently “remastering” the solo Knight Watchman stories into online newspaper style strips, which will transition into new content soon that will be written by Roger McKenzie (best known for Daredevil), drawn by Ecker and inked by Matthew Hansel. 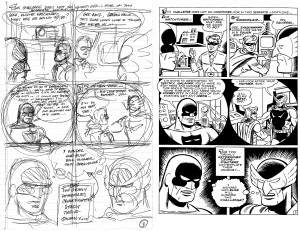 Although BBC can be categorized to have a classic comic book style it has a vintage feel and delves deeper than the comic leads on. Big Bang Comics is about evoking a time period with a specific style of art that’s chosen for a story. The comic values its artists who can capture that feeling without using direct panel swipes in the stories.

“I liken the group of us to a comic book version of a Vegas act like Legends in Concert or a performer like Michael Bublé — we use familiar voices and cues, but we’re singing entirely new and different songs,” says Ecker.

It’s a common understanding that comics are for everyone of any gender and all ages but BBC hopes it’ll also connect with comic book fans that are open-minded to new experiences. Big Bang Comics would love to see people widen their horizons reading its refreshing stories, discover new characters, and enjoy red-hot art that captures the essence of what readers love about Golden Age and Silver Age comic books.

Above: First digital strip by Ecker, Carlson, McKenzie, and Hansel

Ecker dreams big of Big Bang Comics’ future that includes a Knight Watchman television or web series along with a movie. He plans to reintroduce the Junior Watchman club for kids and the process is rolling with him and Carlson currently working on a colouring book.

Working diligently and being busy won’t distract the founders from the basics.

“[An achievement would be to] simply [sic] have fun telling comic stories and share them with like-minded fans. Making a buck or two along the way wouldn’t hurt,” laughs Ecker.

You can check out Big Bang Comics’ links below: