Based in a retail chain store with witty banter, romantic encounters, and relatable characters, Between Failures captures real life antics and reintroduces them in a comedic fashion.

Jackie Thomas Wohlenhaus, 38, originally created Between Failures as an almost completed script when he liked the idea of writing movies and when Webcomics Weekly motivated him to publish online. The webcomic’s name comes from “a line of dialogue meant to encapsulate the negative outlook of the protagonist.”

“‘Life is what happens between failures’ [it’s] essentially a bastardization of ‘mean time between failures’ [sic] which is as Wikipedia puts it ‘…is the predicted elapsed time between inherent failures of a system during operation.’ The phrase comes up from time to time, but what it means to the protagonist changes as he grows,” said Wohlenhaus. 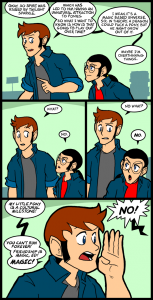 Between Failures is about a group of twenty somethings trying to fill their time in retail with entertaining activities which usually amounts to romantic comedy. The majority of the main cast works at the Marbleton branch of the Megatainment chain of stores. The main cast consists of J. Thomas Blackwell, Edward Lincoln, Carol Graves, Nina Grace, John Kepler, Jolene “Brooksie” Brooks, Miguel “Mike” Hernandez, Reginald “Reggie” Watson Boothe, Wes Asel, and Jessica Harlan Lincoln. Readers can find more about each character on the website’s cast page.

The Between Failures cast is a blend of Wohlenhaus and people he knows that are “boiled down into friendly archetypes.”

“Thomas is named after me, but fits into a complex, and arbitrary naming system. It obviously has to do with American history, but no one has ever managed to decipher it. That only holds true for characters named before Wesley. After he was introduced it varies from character to character depending on their origin,” said Wohlenhaus.

The 38-year-old created Edward and Jessica Lincoln as twins because it seemed natural to him as he knows many in real life. He says it helps him “drive home” aspects of the siblings’ relationship and personalities that would probably not happen if they were typical siblings.

“Twins seem to have a harder time letting go of one another as part of growing up. It illustrates how immature they both are, since they basically haven’t started lives of their own yet,” said Wohlenhaus. 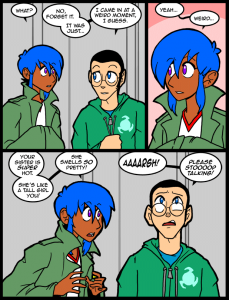 Even the webcomic creator was surprised with Jessica and Jolene’s romance. Wohlenhaus says when the two girls ended up in scenes together there was a chemistry he was unfamiliar with. For awhile, he hesitated letting them fall in love .

“Somehow I felt like I needed them to tell me that it was right for them, which might sound crazy, but that’s how it felt. Up until the very last moment I had two outcomes written, and went with the one that felt the most real,” said Wohlenhaus.

The Kansan used to work many years in an “everything store” similar to a Midwestern take on a Barnes and Noble. Between Failures is based in a chain retail store because the majority of readers know what a “big box store” looks like.

“Since I’m terrible with backgrounds I don’t have to paint a very clear picture for people to imagine what’s standing around behind everyone,” said Wohlenhaus.

The uniform colours are also relatable for readers because the blue green can be imagined from Wal-Mart, Best Buy, or anything similar. 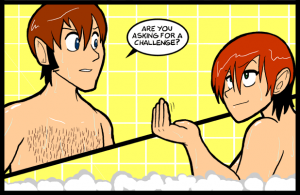 A distinct change in Between Failures is the black and white to colour swap when Thomas Blackwell and Carol Graves share their first kiss.

“It came to me in the first few days of working out how the script was going to be changed for the new medium. I knew I wouldn’t be able to start in colour, so it came down to just doing it one day, or actually making it part of the narrative. There is a line just before it happens where Thomas mentions colour. As I was reading it over it suddenly seemed like the most obvious thing to do,” said Wohlenhaus.

The Kansan says that although people can successful with black and white there are ones that do not do as well. He shares that people like coloured comics and his style “lends itself” to colour.

The Between Failures creator’s process for creating a comic strip begins with a rough idea for a dialogue that becomes a specific dialogue. He says based on the emotions dictated by the text he then decides his panel layout and starts sketching. Once he has an almost clear idea of where his cast is placed he then tries to fit the text into places where it reads properly and least interferes with the art. The artist then inks his sketch, adds colour, and paints in the necessary background elements.

“On a good day I can finish a page in a couple of hours. If it goes awry it can take as many as eight. I often have to split sessions apart so as to fit them in between everyday life. I try to complete the line work as much as possible first, since it takes the longest. In a pinch I can ad[d] colour in a matter of minutes,” said Wohlenhaus.

Wohlenhaus has many works that inspires him than any particular role model. As a teen, he loved Rumiko Takahashi’s work (best known for Uresei Yatsura and Inuyasha) and Johji Manabe (best known for Caravan Kidd, Outlanders, and Capricorn) that he says now can be seen in his art style. Currently, the Between Failures artist is infatuated with Eiichiro Oda’s One Piece. 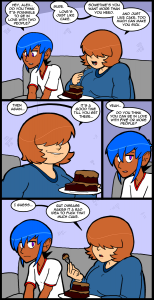 The 38-year-old says in five or 10 years, he would like to see Between Failures become a beloved tale of a group of friends who made the world a better place. He says as long as people are still interested in his story, he’ll do it as long as he can.

“If I keep getting faster and better, and continue acquiring better tools, hopefully I can go back to doing it daily again someday,” said Wohlenhaus.

He says that if that does not happen he would stilI like to make a “perfect collection” of the first story that is a little more fully realized than the original.

“The most magical part of my brain would love to see it become the movie it was born to be,” said Wohlenhaus.

The artist shares what he wants readers to take and learn from Between Failures.

“The person most responsible for the state of your life is you. Don’t rely on others to save you. Save yourself, and as many people as you can on the way,” said Wohlenhaus.

You can check out Jackie Wohlenhaus’ other links below: