Trucking along as a D.I.N.K. (dual income no kids) couple and not being able to have children, Christian Lee and his wife decided to adopt and it eventually lead to Forever Family Comic.

“We give a peek inside some of the issues that [affect] a blended family, like race, attachment, and surprise babies,” said Lee. Readers can join his kids’ alter-egos, Captain Lunchbox and Thermos Girl on their imaginary adventures.

Forever Family Comic aims to be a funny comic and a place to read a blog that looks at topics from different perspectives. Lee says they also want to promote the idea of adoption and shares his kids’ story.

Before Lee adopted his first two children, CJ and Mia were siblings aged five and three and therefore social services didn’t want to separate them. Some adoption agencies may separate birth siblings to increase the chances of the children’s adoptive availability.

According to Child Welfare Information Gateway, it is crucial that sibling support is available to isolated children.

The second obstacle for the siblings was because they were black. Lee says black children have a somewhat harder time getting adopted by any race. The third difficulty was because Mia has only one kidney that functions at 65% which means a lot of doctor visits and surgeries. Lee says him and his wife thought someone should step up for CJ and Mia and decided they would be that ‘someone.’

“It didn’t hurt that we were a perfect fit and fell in love with them the moment we met,” said Lee.

The Virginian says when a person adopts, that person (and the judge) tells the newly adopted child that the person is their “forever family” and thus the origin of the webcomic’s name.

Drawing cartoon characters of loved ones may not always receive wonderful feedback but Lee does ask his wife for her opinion on his art. The 37-year-old says she’s his “go-to critic” and although Lee doesn’t always take her advice, he says she is usually spot-on with her suggestions.

Depending on how involved and obsessed he is over miniscule details of his comics, Lee ranges between 2-6 hours per strip.

“I still want it to look good but I’d rather get a laugh than an art award,” says Lee.

Comic book artist, Bill Watterson of the popular Calvin and Hobbes seems to mesmerize Lee as he gushes on about his role model. The 37-year-old says Watterson is a true inspiration with his beautiful art and talent of connecting readers back to their own childhood feelings.

“I don’t think anyone has, or will ever, do it better,” insists Lee.

When FFC launched, it received a good response but it mostly came from family and friends. Lee finds the real challenge of promoting FFC breaking past the limit of “your existing Facebook friends.”

The Lee family went as spectators to last year’s Small Press Expo where CJ distributed about 150 flyers for their site. Lee says FFC might exhibit this year and has waited to make sure they had a “decent backlog of work first.” Forever Family Comic doesn’t have any merchandise yet but Lee plans to publish a book with comics and stories about adoption in the near future.

He  jokes about wanting everyone to have a FFC tattoo on their forehead and wonder how they ever lived without the webcomic. Lee says he just wants to make people laugh and introduce them to the world of adoption.

“I think it would be great if someone said ‘Your comic planted a seed in my head. We adopted a year later and have never been happier,’” says Lee.

The webcomic artist wishes to see his son, CJ have some opportunities that wouldn’t have been available to him otherwise.

CJ is a budding comic book artist that is featured on FFC’s page under CJ’S COMICS. He loves to draw but also wants to be an astronaut, hockey player, boxer, and more. Lee says his son recently nixed boxer off the list when he told him boxers break their hands and that would make drawing difficult.

The 7-year-old insists he doesn’t want his art style to be like his dad’s.

“I like my style. No one draws like me,” says CJ. Lee agrees and goes on to say he sometimes feels that his son’s style is unique and quite advanced for CJ’s age. 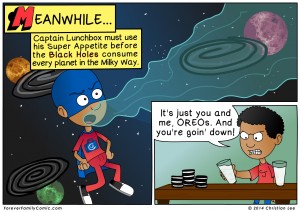 CJ’s alter-ego, Captain Lunchbox may be in the main comic strips of FFC but he also has his own comic book hero, Eric. His superpower is super speed and readers can follow Eric’s adventures on FFC. Lee says him and CJ had an issue where his son has “acquired” a character he claimed was his own but was not.

The young artist says his favourite superhero is Superman because his many powers. His superpower of choice is teleportation and his mature response is so he won’t be late for work when he grows up.

CJ has taken his art skills seriously and believes he will begin his own webcomic in the near future. He says his biggest responsibility as an artist is to make his comic good so people can understand the story. CJ emphasizes on correct frames, speech bubbles, and words.

The 7-year-old artist disagrees with anyone who thinks they’re not good enough to draw.

“I say anyone can draw a comic. You just need to practice. You can’t be too young to start,” says CJ.

Lee chimes in saying that people don’t need to “spend a dime” to start a comic these days. People can draw something, post it online, and it can immediately be shared with billions of others.

“An artist is one of the few things you can be the day you start [and] then [you] just keep getting better every day,” says Lee.

Most of Forever Family Comic’s structure come from Lee’s roots as a stand-up comedian. Lee grew up singing and being in the spotlight in front his family, friends, and communion. His father was a minister and Lee naturally grew up with the church.

Lee switched to Christian comedy as another way to talk more about adoption.

“No one wants a sermon at a comedy club,” says Lee.

He doesn’t have a solid answer now as to why he stayed in Christian comedy. Lee says it’s harder than clubs with brutal opinions and he has to walk a “fine line” that changes with each venue he visited.

Some people are sensitive to the idea of Christian comedy and Lee has had his share of good and bad feedback.

“I had a person write me a very long email about how wrong it was to make a joke about Anne Frank,” Lee reassures the joke wasn’t even remotely about the Jewish Holocaust victim, “But, seriously… Anne Frank. Too soon? They then referred me to funnier Christian comics that I could learn a lesson, or 20 from.”

His best feedback was his minister’s response to that particular e-mail.

“When I showed that email to a Minister and he said, ‘Those people aren’t funny. Don’t listen to that’.”

You can check out other Forever Family Comic links below: