So there I am, passively following Robert’s introduction. He’s delving into why he started writing a zombie comic. “Good zombie movies show us how messed up we are.” A nice twist on the subject; not focusing solely on the monsters without, but perhaps also on the monsters within. I’m intrigued. There’s a lot of social commentary to consider in this concept. Exaggerated ideas of what humanity might look like under a dangerous (and popularly possible) epoch shift in our history. Zombies themselves are vapid, but perhaps Kirkman is looking to flesh out how a virus reanimating corpses would affect the human psyche, in a more lively tone.

I allow him to continue, “With The Walking Dead, I want to explore how people deal with extreme situations and how these events CHANGE them. I’m in this for the long haul.” You know what, Kirkman, I too can commit to a well structured case study for the character exposition of zombie survivors. There’s a heady appeal to analyzing the adaptation tendencies of mankind on this hypothetical journey. A mix of psychology and personal development while traversing a never ending gambit of fatal situations. 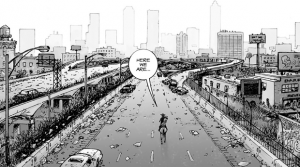 The chosen protagonist for The Walking Dead, Rick Grimes, is Kirkman’s Odysseus. He’s a wholesome soul awakening into a world rife with death and hardship. His goal is not only to survive, but to find his family a new home and a new way of life. He depicts the key elements of any established literary monomyth (re monomyth: a framework for the “classic hero”, exposited by Joseph Campbell in, The Hero With a Thousand Faces. Here’s a concise synopsis of his breakdown for the classic hero’s journey. Notice how many boxes Rick Grimes ticks off on the checklist.) Make no mistake about it, Rick is the hero of this Walking Dead series; both comic and television productions.

“You guys are going to get to see Rick change and mature to the point that, when you look back on this book, you won’t even recognize him. I hope you guys are looking forward to a sprawling epic, because that’s the idea with this one.”  With all the death and resurrection in comics, I find myself lured in by the prospect that this protagonist, with no special powers and no pre-determined fate from the gods, will walk me through the scenery of apocalyptic change, from start to finish. Rick Grimes, is the viewers’ guide. “… this book is more about watching Rick survive than it is about watching zombies pop around the corner to scare you. I hope that’s what you guys are into.”

Why yes, Robert Kirkman, that is what I’m into. I am not only hoping for Rick to survive this tale, I’m expecting him to make it right the final pages… since that is what you’ve just stated…of your own volition… without any instigation from the public. I’m glad you’ve clarified your objective in the very beginning. I wouldn’t want to approach your epic with the understanding that the protagonist is, naturally, the story’s focal point or barometer, only to find, after much time and devotion, that he isn’t the epicentre and is therefore expendable. Hopefully never for anything as passe as circulation, trendy realism, or pandering to shock value. “For me the worst part of every zombie movie is the end. I always want to know what happens next. Even when all the characters die at the end… I just want it to keep going. More often than not, zombie movies feel like a slice of a person’s life shown until whoever is in charge of the movie gets bored. So we get to know the character, they have an adventure then, BOOM, as soon as things start getting good… those pesky credits start rolling.”  Agreed!

“The idea behind The Walking Dead is to stay with the character, in this case, Rick Grimes for as long as is humanly possible. I want The Walking Dead to be a chronicle of years of Rick’s life. We will NEVER wonder what happens to Rick next, we will see it. The Walking Dead will be the zombie movie that never ends.” Staying with Rick ‘as long as is humanly possible’ means staying with him until his death, which can be the natural conclusion to a self-contained story of adaptation and humanity through the eyes of one wholesome, handsome Sheriff. When his eyes finally close, so too should this chapter of The Walking Dead. Dragging the story out past its natural end runs the risk of losing the audiences’ support and attention, along with the original intentions established in the tale’s beginning. 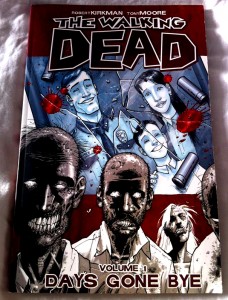 Every quoted word hereto are the green, earnest remarks of an author embarking on the biggest project he had yet imagined. Setting the focus on Rick as the work’s protagonist makes up the lion’s share of dialogue in the Introduction to Book I of The Walking Dead comic book series, “Days Gone Bye”. It’s a raw, colloquial preface by Robert Kirkman, and you’ll forgive me if my viewership into his post-apocalyptic world began because I took him at his word. Literally and literarily.

For some passive comic book audiences (read: me), the notion of having a framework revolve around a single character may not be new, but Kirkman’s pitch had a carrot. Following a humanoid with no special powers, in an extremely volatile environment, where death is eminent throughout, but where the story lasts only as long as he does, is a riveting twist on today’s mainstream norm. The norm where, audiences anticipate character deaths in regular intervals as a means of spicing up or sensationalising the plot. Where they know that the story will continue on (as long as it’s popular) by replacing any lost character in short-order. Where a story is left to fade into insignificance because it couldn’t come to a definitive, timely, and purposeful conclusion.

So why, oh why, Mr. Kirkman, have you instigated a discourse that considers The Walking Dead without Rick? In an AMC Q&A from 2013, Kirkman nonchalantly mentions to the ethersphere, “We’ve been saying that no one is safe on this show, and I wouldn’t rule out seeing the death of Rick Grimes at almost any point. We really like to keep people guessing, and I could definitely see some interesting stories coming from that.”  That, of course, wasn’t really the deal. TWD has grown from a comic, into graphic novel omnibuses, and onto become one of the front-runner television shows of its time. The storylines between mediums are not seamlessly matched up, but they are keeping numerous focal points in check. Rick, being the major focal point, risks having the television version of his character affected by the fate of his comic book version, as has often been the precedent.

Mild spoiler alert: The series is at Book 137 & Season 5, Episode 15 and Kirkman’s 2013 inferences have not yet led to Rick’s untimely death. Hopefully, they’re merely part of the tiresome postulating creators put out to the public in order to “keep viewers guessing”. As if death is the most interesting thing that can happen to a character. To this point, The Walking Dead has remained intriguing to many because it has worked hard to show an audience that, even amongst death, there are innumerable other things of interest that can happen to mankind. Even to just one single man. Creative and disturbing, these alternate fates are often more enthralling, engaging, and enduring than the most elaborate death. 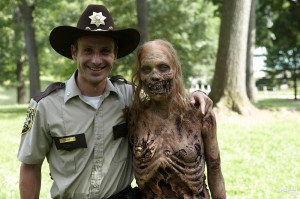 Unsurprisingly in this current climate of juggernaut fiction franchises, The Walking Dead has already been greenlit for a companion series. A series that utilizes the same universe, without being based on the same characters. This means Kirkman will get to write all those interesting stories he envisions, but that shouldn’t be told during Rick’s journey. With the start of a new series he can write the perspective of all new protagonists from within the already established apocalypse. New focal points, new characters, new stories in an environment made familiar to the audience by Rick Grimes. This also doesn’t preclude the possibility of a spinoff series, where some of the old characters start a new story, not on the back of Rick’s tales, but independently, with its own focus and morals. What need is there then, with such production assurances, to reneg on the Rick-centricity of the debut tale in The Walking Dead sphere? To drag out this original story past its natural conclusion. Shifting the focus until the audiences eyes glaze over and the significance of Rick’s story arc is diminished unceremoniously. With the creative freedoms afforded through TWD’s unbridled success, surely Kirkman can have his brains and eat them too.

I give you, Kirkman’s New World Testament. Gospels telling of a changed world, through the eyes of a chosen few. This gospel of Rick Grimes is destined to be the first of many. A sharp, intelligent, self-contained fable about a hero’s foray into a dangerous new world. As was Kirkman’s original intentions, stated in his “Days Gone Bye” Introduction, Rick was placed in front of us as an ambassador and guide, so he may see us through to the finish, whatever end may come. And when his story is complete, may we close the pages on his vantage point with a satiating understanding of his journey and some insight into the adaptation tendencies of the human race through the experiences of one man.

And, once we’ve placed Rick befittingly onto his literary pedestal, may we look forward to a brand new Gospel on a fresh new page of the Testament. For surely, as Kirkman has stated, there are many lessons left to learn, and many steps yet to take whilst walking amongst his dead.