“The Devil’s most devilish when respectable.” – E.B. Browning

The Man Without Fear braves his next attempt at joining the world of (successful) live action entertainment. With the masses’ figuratively unanimous decision in, the verdict is: third time’s a charm, Daredevil fans. Not that Marvel or Netflix are in need of such magical assistance as they currently reside atop their respective industry’s podiums. The comic book staple, Daredevil, however, has never had a lot to live up to off its inked pages. That changes with the April 2015 release of his 13 episode Netflix series. Double D has finally seen his way to the front of the pack; setting the new standard in the small screen superhero race along the way. 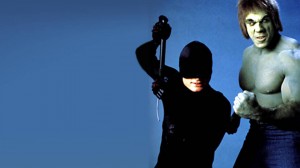 Daredevil’s first daring TV appearance in the NBC film, The Trial of The Incredible Hulk (1989).

Daredevil (who daylights as morally-sound lawyer, Matthew Murdock), has an extensive, respectable cannon in the world of comic books. Created by Stan Lee and Bill Everett (with a nod for Jack Kirby), he first premiered in Daredevil #1 (April 1964). The character has endured for numerous and diverse decades, through a multitude of multiplying universes. He regularly lands modest rankings on Best All-Time Superhero lists (a quick search shows him 10th on IGN, 17th at Ranker, and so on and so forth). And he’s heavily touted as a superhero with a disability, since the classic-comic book-toxic-waste-accident left him blind. While he represents a refreshing dose of diversity in mainstream comic culture, the accident did, of course, also amplify the rest of his senses to the point of super-abilities. Be any standard, Daredevil is a solid comic book hero.

His first attempt at live-action produced only sampler-size roles as Daredevil tried and failed to find footing in the television market from the 70s to the 90s. His cameos often involved helping out flashier names like Spider-Man, the Incredible Hulk, and the Fantastic Four. He did have an unaired pilot which was produced and canned along the way. For the twenty plus years that followed, Daredevil has shown up in his best pixelated suits for numerous Marvel video games (like these). He’s been a popular guy, sporting a history with the sultry, talented Elektra and a camaraderie with the fun, neighbourly Spidey. Daredevil, by all accounts, has waited patiently for his big screen appearance.

And so there was attempt number two: Daredevil (2003), written and directed by Mark Steven Johnson. Enter Affleck. Exit Affleck. It’s said that Ben Affleck was the bomb in Phantoms (yo). And it’s equally postulated that Ben Affleck bombed in Daredevil (no?). Skipping all the negative rants owed to this movie (of which Affleck is nowhere near the most damning), it *did* check off a lot of iconic boxes (red outfit included). Not a believer? Here’s a whole article from EW making the case. The film had key canonized building blocks in the inventory, but the finished project is commemorated as a spectacular boondoggle.

Today, after standing on the rooftops, echolocating the sources of our grumbles and excitement, Daredevil takes his first, seriously badass steps off paper and into show business. Attempt number three starts with step one: align yourself with the juggernaut crew leading the entertainment business’s streaming revolution. Netflix, the superpower of its industry (whether hero or villain depends on how you see such large and successful intellectual property libraries for hire), has busted onto the scene guns a blazin’: House of Cards, Orange is the New Black, Marco Polo. They run short seasons with big budgets, and the high production value is always palpable. They’ve stepped into big name stand up, comedies with podium-topping writers, keen acquisitions like Arrested Development and Trailer Park Boys. Netflix makes smart decisions.(A soon-to-be-dynasty? Check out Netflix’s accomplishments to date and to come). Their foray into the world of superheroes has maintained their momentum, with Daredevil the first of many Marvel series’ already in the works.

Regarding his vision for the Netflix Daredevil series, Marvel Television’s head, Jeph Loeb, told Entertainment Weekly that “there aren’t going to be people flying through the sky; there are no magic hammers. We’ve always approached this as a crime drama first, superhero show second.” (Here’s the January 2015 article for further envisioning.) The reality is that most of the initial viewers will be fans of Daredevil, fans of comics, or at least fans of this burgeoning action genre. Word of mouth, pushed by the show’s critical success, will undoubtedly attract additional demographics with it’s duality as a crime drama. Subtle references to the Avengers film continuity will do their darnedest to draw new eyes to the Marvel franchise as a whole,  whilst diligently feeding crumbs to the ever-hungry already-present fandom.

It’s too soon after Daredevil’s full season release to cover specifics of the Netflix show without spoilers. So instead, if you haven’t yet watched the show, here are handful of comparisons and talking points:

The dark alley grit that, heretofore, has been done best by Arrow? Surpassed in it’s dirtiness and grittiness by Daredevil. Both heroes do enjoy banishing men from “their city”. And while the Arrow more regularly leans on stunts to razzle, the action in Hell’s Kitchen is done seamlessly (and often seemingly wireless), dazzling in its creative, realistically fluid choreography and movement. 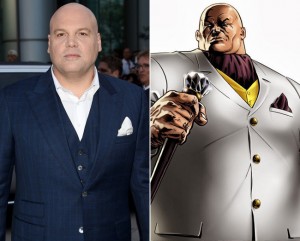 Vincent D’Onofrio as Wilson Fisk – hiding an entire barrel in his chest.

Barry Allen’s chirpy voice welcomes us into the family-friendly CW world where his alter ego, The Flash, battles meta-humans with super-abilities. While Daredevil’s segue walks us through bloody silhouettes into the paths of a bloodier criminal element; grounded in our current evolutionary perimeters and adult content. The Flash’s gang has fun making up villains’ monikers for a new demographic with superpowers in Starling City. Daredevil deals with less fun villains, involving super graphic knifing scenes and enough angry-adrenaline-power to decapitate a man with a car door in Hell’s Kitchen.

The scope of Daredevil is currently much more narrow than the meandering plots of The Agents of S.H.I.E.L.D.. It’s hard to find a character as likable as Agent Coulson. But, Vincent D’Onofrio put on, like, 100 pounds of meat and lost 10 pounds of hair to portray DD’s nemesis, Wilson Fisk. All the quirks that fell flat with Vince’s portrayal of Detective Robert Goren in Law & Order, have found a home in his slow, deliberate take on this thunderous, multi-dimensional bad guy, Kingpin.

With a dedication to its classic comic continuity (noticeably lacking in the choices of Fox’s Gotham) Marvel Television still successfully prioritizes the crime show elements of the Daredevil series. There is a sombre, three dimensional element to character exposition. The pace is digestible and methodical in a way that does pay homage to The Wire, as intended by the production crew. The script doesn’t dumb down its clever turns. Common sense in uncommonly present throughout. Matthew Murdock (portrayed by Charlie Cox), with his soft gruff tone, (literal) rose-coloured glasses, and petit unassuming frame, smacks of Battlestar Galactica’s lawyer, Romo Lampkin (portrayed by Mark Sheppard) and his quietly brilliant, unorthodox approach to justice. Murdock’s sidekick, Foggy Nelson, as comic relief is passable (and improving), even if the actor, Elden Henson, still looks unshakably like he did as Fulton Reed, the “enforcer” from Disney’s The Mighty Ducks..

Daredevil, like Elden, has broken away from its kid-friendly origins in a successful and promising manner. Netflix is building a roster of quality productions, with unique cinematography, focused story development, pertinent dialogue, worthwhile character development, and a sense of realism that rivals the DC universe while maintaining Marvel’s dedication to its own cannon.

We’ve grown accustomed to watching five bad guys bobbing around in a breakdancing circle while the protagonist takes on one fighter at a time. Well, Daredevil pulls out all the stops to ensure that lazy disconnect doesn’t happen in this show. Watch Season 1, Episode 2, from 0:40:00  to 0:44:55 (ish). Consider it a taste test. In essence, it’s a satiating microcosm of all the reasons why I’m a Daredevil Advocate.