Unknown to humans, there exist guardians called Dreamkeepers that protect their dreams with supernatural powers and fight against the savage Nightmares that wish to cross the fantasy realm and control their minds and it can all be found in Dreamkeepers.

Dave Lillie, 31, and Liz Lillie, 30, launched Dreamkeepers in December 2006 when they printed volume one and mailed it across the country to their earliest readers. They came up with the idea of Dreamkeepers when their old college roommate suffered hideous nightmares. They discussed how great it would be if there was something to protect their dreams thus the title of the webcomic.

“That summer I read up on Mesopotamian culture [and] they actually did believe in a spiritual dream protector [that’s when I] started assembling the concept,” said Dave. 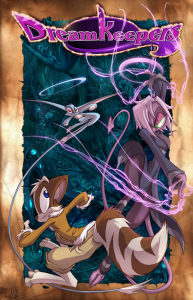 Above: Mace (left) and Namah (right)

The Michiganders’ goal of their unique character names was for it to be punchy and memorable like Mace and Whip. The creators say names like Igrath, Lilith, and Namah (originally Naamah) were “lifted from some Mesopotamian guys who forgot to copyright their tablets properly.” The Nightmares are created differently with the concept of not given a birth name but some try to name themselves like Scuttles. A nightmare like Arazu has earned infamy among his peers and retains his name through multiple rebirths.

“All Dreamkeepers have a power – but in the city of Anduruna, powers have been outlawed.  Infractors face the regulatory force of the shock troopers. Because in a perfect city there is no place for violence, and the nightmares of legend can be safely dismissed as ancient fiction.  Until now,” described Dave to what the webcomic is about. 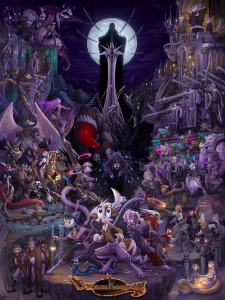 Above: Mace, his friends, his allies, and the Nightmares

Aside from the guardians of dreams, the Dreamkeepers, and the relentless Nightmares, there also exists the shocktroopers. Shocktroopers are highly trained professionals that are armed with automatic spring-carbine rifles, knives, blast armour, troop carriers, and artillery that deal with the most dangerous criminals in Andurana or keep in check rouge Dreamkeepers that may be wielding a supernatural power.

But shocktroopers are no match for the Nightmares and that is where the Dreamkeepers step in. The story starts in an era where almost everyone believes that the Nightmares are a legend and to some even a myth. The Nightmares believe that no one believes they exist any more and thus are secretly “paving the way for a hellish return” but an unexpected discovery turns a certain protagonist’s life upside down. Readers can start following the action-packed webcomic here. 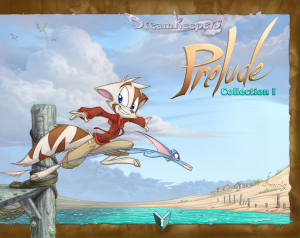 Above: Mace and Whip (right)

To clarify, Whip, the blue friend that hangs around Mace is not a pet but a Dreamkeeper like Mace and anyone else but he has “what the schools call ‘special needs’” thus the lack of communication skills.

Ryuu-nekos are the pets of Adurana and can be referred to as dragon cats. The creators started the idea with a “cute little ball python” that extended to creating them fluffier. They thought of making them more active and caring so the two added fur, tiny feet, and elemental variation.

“Their growth rate is a holdover from their reptile inspiration. There are feed limits in Anduruna, because if you let them eat more they get huge- actual dragon-sized,” informed the 31-year-old.

The Dreamkeepers staff consists of Dave, Liz, and freelancers. Dave and Liz are both writers and artists for their webcomics whereas their freelancers assist Liz with colour blocking. Dreamkeepers‘ writing process begins with Dave and Liz brainstorming and recording quotes in notebooks. From there, characters are established with their narratives written out. Dave creates the rough drafts and Liz edits them.

“I’m excited with our progress – it feels not like creation, but like progressively discovering a pre-existing form,” shared Dave. 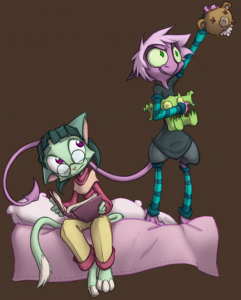 Above: Lilith (left) and Namah

The art process begins with the two creators writing an entire volume first that leads to a polished draft which can take a couple of months. Then, the pages are broken down, and Dave thumbnails the page where he says this part is a key important part because it is where all the major decisions about the art happens. Panel layout, composition, basic figure placement, poses, and camera angles all take place in the thumbnail and Dave says a good thumbnail can take two hours if he counts the revision time. He continues with sketching his page first in blue pencil which can take about a third of a day. Then, he scans and layouts the page in Photoshop which can take another third of a day. Next, he goes over his blue pencil with detailed, black pencil which takes half a day. After detailing, Liz colour blocks with some assistance of freelancers which can take from 12 to 20-hours depending on the complexity of the scene. Next, shading and lighting can take half a day or longer and then Dave and Liz collaborate on polishing the final product.

The art does not just stop at their webcomic as it extends to the animations on the Dreamkeepers website. Icons that change as readers hover their mouse over them are created by the two artists.

“[We] couldn’t afford to hire a web designer, so we just did it ourselves,” said Dave as he also explained that coding the icons was time-consuming, “the icons were easier, because it’s like the shortest animation ever – just two frames. We wanted to make the website really cool and fun to explore, enrich the experience for readers. A little extra effort here and there helps bring the world to life,” said the 31-year-old. 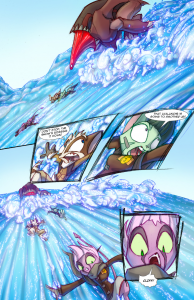 Above: Mace, Lilith, and Namah on the run

Dreamkeepers falls under the furry genre and although Dave says it is exciting to make a furry webcomic which allows for total creative freedom he does say the label comes with a lot of baggage.

The Dreamkeepers creators have attended conventions like Anthrocon which they say is their biggest annual convention that treats the two “amazingly well.” They have also attended Midwest FurFest and Motor City Furry Con. Dave says he has been to anime and comic conventions and says those crowds tend not to be quick to evaluate and enjoy independent creations apart from what the mass sees on television. He believes that furry cons have been the most receptive in that regard.

The Dreamkeepers creators dream to build their readership until they can sustainably branch into other mediums like video games and animation.

“I want to make an independent franchise that has the same cultural footprint as something from a major studio. And I want our publishing company, Vivid, to bring other creators to light and give them the same opportunity. I want the future of entertainment to be a meritocracy, where readers and creators are the ones who determine what flourishes,” shared the Michigander.

You can find Dave and Liz Lillie’s other links below: