A rough 14-hours is the longest time Peter Minhsang Huynh has gone without food while gaming.

The Windsor, Ontario gamer competitively plays League of Legends (LoL), an ever-growing multiplayer online battle arena (MOBA) that consists of two teams with unique champions and skills. Players’ skills are put to the test in multiple game modes and battlefields.

GamesBeat reported that LoL reaches 27 million players daily and has doubled since October 2012. League of Legends generated $624 million in 2013 ranking it second in the biggest earner in the skyrocketing free-to-play category.

For the more competitive gamers like Huynh, ranked games is an available mode in League of Legends.

Players play 10 placements matches that will determine the tier they belong in. Each tier has five stages from roman numerals V to I then a player can advance by winning three out five of their promotion matches. From bottom to top, tiers are as follows: Bronze, Silver, Gold, Platinum, Diamond, and Challenger.

Huynh, a Diamond I player mains the middle lane role followed in order by support, top, jungle, and marksman. As of the last patch on April 16, his preferred champions are Gragas, Renekton, Kha’Zix, Annie, and Lucian.

The young gamer remembers his best play in League of Legends.

“[I outplayed] Cris in [an] one-on-one match-up with Gragas. He was playing Kennen and I knocked him into my barrel with my ult.”

There are many players who jump into ranked games without the knowledge of proper game play. Huynh suggests that these hasty gamers should play enough normal games to gain experience and try out different roles.

Gamers are sometimes thrown in the limelight for their poor reaction during bad games or when they lose known as gamer rage or rage quitting. The 22-year-old says he doesn’t rage quit and his solution is to take a break for a couple of hours. These unfortunate games are typically littered by internet trolls who are individuals that purposely upset others usually through words. Huynh says the most common thing trolls have said to him was: You’re Diamond? Wow, you suck.

“When I started out League of Legends, I use to main jungle and I watched a streamer named TheOddOne,” explained Huynh.

Skins are the appearance of a champion and is similar to the clothes players can buy for their character(s) in other MOBAs. In League of Legends, players buy skins with real money but each skin has its own splash art that makes the champion look unique. Some skins have different quotes, sound effects, and more.

“Cigar Fiddlesticks would be a cool skin but would promote smoking. I don’t smoke,” said Huynh in reply to a skin he would like to see.

The gamer hasn’t been competitive in LoL since March 16 and currently plays Hearthstone and Rust with his friends. 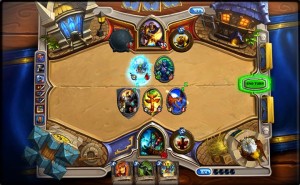 Above: Screen cap of a Hearthstone game

Hearthstone is an online fast-paced strategy card game and Rust is a survival game that consists of foraging and a kill-or-be-killed game play. Both games are MOBAs.

Although a talented gamer, Huynh says he would not want to be a pro gamer.

“I have thought about it and wouldn’t want to go pro because it takes too much time and effort. If you have played poorly, forums and people tend to get to you. I’m twenty two and [there are] young gamers that are seventeen or eighteen who are much better than I am. At an older age you lose sight and reflexes.”

Huynh offers nothing but encouragement and a bit of wisdom to young gamers who might be in high school seeking to go professional. He says if young teens want to pursue this path they should go for it while they’re still young but be prepared to commit and put in a lot of effort.

The talented gamer says he doesn’t think pro gaming is a temporary career.

“Every year, new games and gamers or what we call athletes now [who] come along to compete.” Huynh isn’t stretching it when he refers to gamers as athletes.

Last year, the United States Citizenship and Immigration Services (USCIS) approved League of Legends as a professional sport to simplify the visa process. The Verge reported on LoL’s eSports VP Dustin Beck saying that many people don’t agree with the decision because they don’t understand why gamers should be recognized as athletes. Beck said League of Legends has a viewership number that is stronger than 80 or 90 percent of the sports covered on ESPN.

As a child, Huynh liked games like Rampage, Crash Bandicoot, and Tekken. Nowadays, he usually plays Tekken with his cousins during visits.

Huynh said he has wanted to design his own massive multiplayer online role-playing game (MMORPG) that would be along the lines of the popular animated series Bleach. In his still untitled game, players would level up to acquire different skills and armor. Players would fight different monsters, defeat bosses, and other players known as (PvP).

Huynh has cut down on his daily gaming average from 8-hours to 5-hours. He knows not eating is unhealthy but in 2008 he gamed for 14-hours without food. Hydrating while gaming is crucial and gamers are typically known to choose energy drinks. Huynh is no exception with Monster Energy drinks but says he does it in moderation.

“I would only drink one because they are so bad for you.”

The gamer says he would choose to give up women for a year instead of games. He explains saying that in Korea, athletes would choose gaming over women because they take their careers seriously. But his decision doesn’t extend to his current relationship.

“I love her too much,” smiled Huynh.

The 22-year-old says at first his girlfriend didn’t understand gaming or how it was a competitive field but now enjoys playing League of Legends with him. Huynh says she’s the type of girl who understands how much he loves his hobby.

You can add Huynh’s League of Legends summoner name: 7buttonsONLY.

Above: Peter Minhsang Huynh with his girlfriend, Jodie Lee