It can be tricky to do a subjective Top 10 list that isn’t comedic in nature. The impulse to thoroughly explain and excuse myself is strong, but, let’s be honest: If I did that, we’d be here all day. And it’s safe to guess that the majority of you are just gonna read the headers, so let’s get this show on the road and get this list started! These are the Top 10 characters I consider the most sympathetic; characters most likely to make me go “Aww….” There are a few more than this, but for me, these are the biggies. I’ll put them in rough order, from 10 to 1.

As with most supervillains, Eddie’s past is a little murky. Who knows if he’s telling the truth or not? Hell, he may even believe the lies he tells.

The most popular of Riddler’s backstories (and the one that stuck with me the most) was that of an abused child. One who constantly had the idea that he wasn’t good enough reinforced in his mind. That he was worthless, that he was stupid. This built up on Riddler’s more well-understood inferiority complex, causing him to obsessively struggle to prove himself. He has to test his intellect, show off, make everyone else believe and acknowledge that he’s the smartest man alive. Sadly, in his universe, it’s a tough title to keep a hold of. To a logical mind, his motivations seem selfish or even childish; but that’s when you realize that they are childish. His disorders stem from childhood trauma and being told that he wasn’t good enough, would never be good enough. And… damn. That’s just sad.

Then he gained one very special friend – the Venom symbiote – and gained an enemy, Spider-Man. Then, one-by-one, those left him, too. His symbiote struggled to pull away from him, and he lost the passion of his enmity with the webslinger. In time, Peter was more an ally than an enemy and finally he sold the symbiote on auction. Then the guy committed friggin’ suicide. Holy crap. I mean, sure, he got better and all (that’s how it goes in comics), but imagine that life? An emotional roller coaster that only ever goes down? I just feel horrible for the poor guy. He really can’t catch a break.

Anyone who’s read Innocence Lost knows what I’m talking about. The girl was born and bred to become a weapon, only shown love from a few people – and immediately had those people quickly and suddenly taken away from her. Even after she escaped the facility she was created in, that torment followed her into a career in prostitution, and eventually superheroics, which seemed to work a little better.

But what really put her on this list for me was this moment, in Circle of Four:

This poor girl didn’t even think she had a soul.

7. Frank Castle, AKA “The Punisher”

How can anyone make a Sympathetic Characters list without this guy? His entirely family was butchered, right there. You also have to consider that, while he actively blames crime for this tragedy, just a little part of him has to blame himself. It was his fault they were murdered and he can never take it back. Never get them back. He’s just alone with his own deathwish, doomed to wander New York, killing everyone that reminds him of the tragedy of his life. 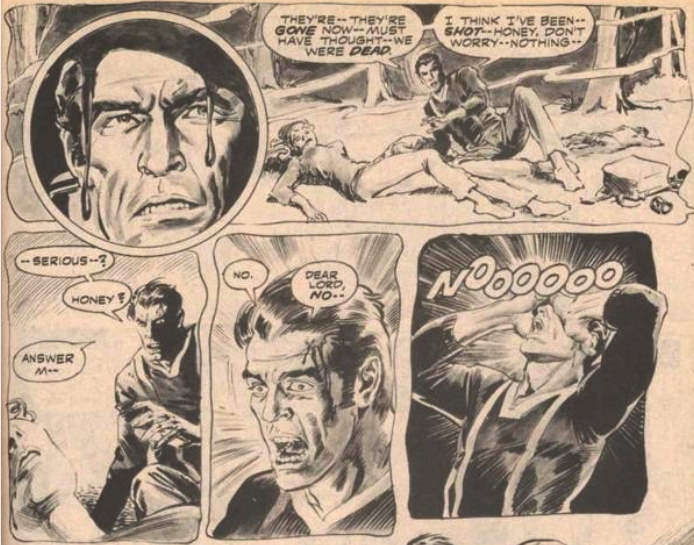 Had her mother slaughtered in front of her. Was gang raped, tortured, and permanently mutilated. One of the few characters to get abused so badly she got superpowers as a result (for those not familiar with the Red Lanterns, their rage and misery attracts the ring). Not that things got better once the ring came. Now she’s cursed with never ending rage and a life of cosmic violence. To remove the ring means immediate death.

Like Punisher, this is another basic one. Victor is in a perpetual state of misery as he watches his wife waste away, doing anything and everything to find a way to bring her back. He’s lost his very humanity, trapped in his frozen shell as his morality decays. He’s willing to hurt people just to have the love of his life back in his arms.

The horrific part is that if he ever did get her back, do you really think she’d want him?

Maybe an oddball choice, but let’s take a look at him. He was bestowed with the power to defend his people, but the power went to his head. Banished to the recesses of space for five thousand years, fully conscious and spending all that time flying back to Earth. When he finally arrives people don’t like him, since he’s a jerk, and he has to be a villain.

However, in 52, he meets Isis, who ends up being the love of his life. They marry, adopt her younger brother, and even get a cool little crocodile buddy. Teth has a family. He becomes a benevolent dictator, a good guy. His people love him. His family loves him. Then they are all killed, and his new wife dies in his arms. This drives him so mad with rage that it starts a new world war.

Fast forward to Black Adam: The Dark Age where we see Teth struggling without his powers… not that it stops him from trying to bring his dead wife back. Within that mini, he has to watch his wife die two more times.

Objectively, at this point it’s tough to top Teth’s tragedy. This is where things get more personal, more about storytelling and personality than actual events.

Here, we have another Red Lantern, the little guy called Ratchet. He’s spent the last hundred and some years in a pod. He’s a father many times over, but he’s never met his children or his “mates.” In fact, he’s never met anyone. His entire life has been spent attached to machines, interacting with people through a sci-fi metaphor for the internet. But he’s miserable, and all he really wants is to get out. Meet people. Have friends.

When he finally escapes and takes the big risk, his own people capture him and make an example of him. He’s tortured for who knows how long, still in solitude. He’s abused so long and so hard that he becomes transformed into a hideous brain-with-tentacles (which, for the record, is not originally what he looked like). And his rage attracts the ring.

Hey, she doesn’t belong here. She wasn’t tortured, nobody she knows was killed. She’s just a crazy chick, right?

Well, yeah, sorta. It takes a lot of knowledge on Harley to realize exactly how tragic she is. Most people know that when she fell in love with the Joker, she lost her mind. Snapped, as it were. Copied his gimmicks and became a madwoman, doomed to a perpetual cycle of emotional and physical abuse at his hands.

But it goes a lot deeper than that.

In the Harley Quinn solo series we see that she was always unhinged, and all she needed to go over the edge was a little push. In med school, her thesis included some… interesting theories. Testing those theories out resulted in her boyfriend’s death.

In Gotham City Sirens we see that it went even deeper than that, even further back. Back to her family. A fanatic mother, a con man father, a deadbeat brother. In her family, she was the reliable one; just try imagining that. We also see that she studied to be a psychology so that one day she could understand her family, see why they acted the way they did. Her entire life has been one long study in madness that resulted in the permanent loss of her own mind. Everything she ever did was tied to love, and her reward was insanity.

Now, not everyone handles Bizarro the same way. But, when he’s done right, he can be portrayed as such an amazingly sad character. Not evil or insane, but twisted and confused. Bizarro thinks he’s the hero. He thinks that he’s doing the right thing, thinks he’s saving people, helping the world. He thinks he’s Superman.

It’s not his fault that he’s wrong.

Bizarro is the incarnation of a dunce. He cannot function, but he’s not so stupid that he doesn’t realize that he can’t function. Everything he touches, he destroys. Everyone he tries to help dies. He doesn’t save Lois – Lois gets saved from him. And eventually, he has to realize that he’s not Superman. Can never be Superman. He’s stuck being Bizarro and he can never change.