Listen up, Brothers and Sisters. Hulkamania is alive and well, as is Hulk Hogan himself.

Saturday at Fan Expo in Toronto is brimming with people and devoid of space to maneuver. While the show floor is packed with bodies and complaints, I sneak down to the lower floor to see if there’s an interesting panel to duck into instead. And that’s where I find it: an auditorium full of young and old Hulkamaniacs awaiting the arrival of the platinum blonde, leg-dropping, wrestling legend. Decades after the peak of his career and Hulk Hogan still draws an impressive (and genuinely impressed) crowd. 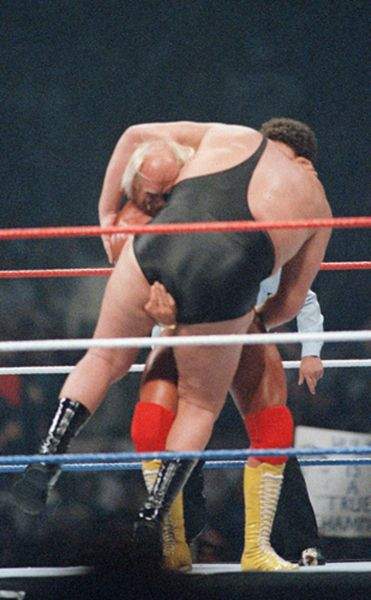 I grab a seat to the side of the stage and eavesdrop on the 8 year old beside me, replica championship belt in hand, deciding which question he wants to ask Hulk Hogan. I’m surprised to hear him recalling matches from the 80s, “the body slam heard round the world” when Hulk body presses a 500 lb Andre the Giant (although Hogan promises Andre was 600 plus pounds at the time: https://www.youtube.com/watch?v=2H_RbnnX-II), feuds with heels, turning heel, transitions from the AWA to the WWF to the WCW to the WWE. There is not a single moment of pause in this kid’s jittery anticipation and no let up of excitement in his voice. I have memories of Hogan’s wrestling history, live. Little did I know at the time that what I was watching would go down in the annals of sports entertainment as “the” classics. 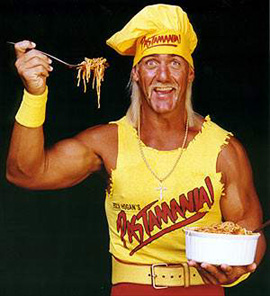 Remembering the WWF during the 1980s is as pleasingly nostalgic as it gets for me. I immediately think of time spent with my brothers watching Saturday morning TV matches and specials like the Main Event on Halloween in 1985 (a refresher of the awesomeness here: http://rarehalloweenvideos.blogspot.ca/2011/10/1985-wwf-saturday-nights-main-event.html). My younger brother, a platinum blonde toddler, clad in his Hulkster red and yellow tee and tightie whities, doing leg drops off the top of the couch onto our mat of pillows on the living room floor. My older brother, trying to figure out how to administer a sleeper hold without making me cry so our parents wouldn’t scold him. There were a number of years in my childhood where the WWF was a major player. While I was partial to Ricky the Dragon Steamboat and Rowdy Roddy Piper, there was always an undeniable draw to the charismatic presence of the Hulkster himself.

And so it was on Saturday as Terry Bollea entered the hall. I could see cosplay Hogans standing on their feet and Hulkamania shirts speckling an audience chanting Hogan’s name. And then I saw Hulk. At 61 years old the man has aged well outwardly. An entirely different story when he begins to speak about the toll his body has taken over years in the sport; metal hips, metal knees, metal pins, 8 back surgeries, and endless injuries resulting from the taxing nature of his intense profession (even his signature leg drop itself).

Hogan is late to the Q&A and it’s worth noting that his delay is due to his unwillingness to leave his autograph station until all of the fans in line had been addressed. He’s brought manager Jimmy Hart with him to open up questions to the audience immediately. No topic is off the table. And every question is met with sincere deliberation and a cascade of thank yous pouring out from behind a moustache so white it blends into his teeth when he smiles. 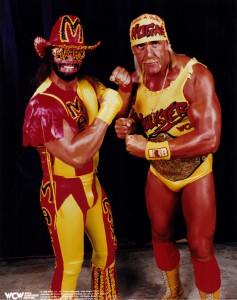 I skipped over the dramatic years of Hogan’s reality TV show, but I’d certainly heard about them. The man in front of us on this day, however, is nothing short of collected and considerate. You cannot get him to say a bad word about any of his peers. Strained relations with Vince McMahon? Not now that Terry gets it – in this industry, you have to know the difference between friendship and business. Hogan claims that Vince would give the shirt off his back to anyone in need. Beef with Macho Man? No hard feelings – they were old friends and Randy had come across bad times. Hogan doesn’t consider any of that drama as part of who Macho Man really was deep down. After decades estranged, they patched things up shortly before Randy Savage passed. Cena sucks? Not a chance, Brother – it’s ok to say those things in the ring, but Cena, as far as Hogan is concerned, has one of the biggest hearts and most generous spirits he’s known. He lists off John’s philanthropic work to prove that Cena, like many of Hogan’s other peers, deserves respect. Respect that the Hulkster doles out freely. His answers and his headspace come off Zen-like, which is marvelous to watch in a man who you know can break your back in an instant.

His demeanor, to my surprise, is noticeably devoid of pomp, even when delivering a “whatcha gonna do!” line at the request of his fans. All Terry’s answers are cradled in politeness and a genuine sense of gratitude. Gratitude for a successful career, gratitude for still having an audience in front of him, and gratitude for even being alive. 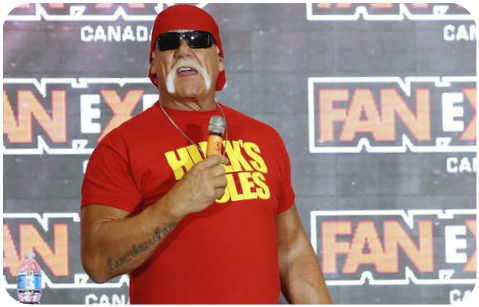 When one gentleman stands up and asks Hogan if he considers his own mortality more these days, I cringe into my seat. What a morbid question for an entertainer to field in front of a jovial audience. But the response we receive is sincere and frank. “I get what you’re saying, Brother.” Hulk recalls a lunchbox he had seen in the hands of a young fan recently. It depicted the likes of Macho Man, the Warrior, Junkyard Dog, Andre the Giant, and Hogan. Although they were all from the same generation of wrestlers, Terry is the only one of them still alive. He considers that a blessing. Choosing to believe that he has something yet to do in life, and that something doesn’t have anything to do with wrestling.

Until he figures it out, Hulk Hogan will continue his life on the beach, close to his shop and restaurant, training a younger generation how to approach the wrestling industry with some smarts. Teachings he’s accumulated from decades of headlining and heartaches. Knowledge he’s more than happy to share within any fan who wishes to meet him. And there really doesn’t seem to be a shortage of fans that still wish to meet him and hear him talk. Little did I know that I was still counted among them.