They’re not mutants, they haven’t been irradiated with gamma rays, nor have they been chosen by the Kree, nor are they gods (except maybe in metaphorical or modern-day mythical sense). No, they’re normal human beings in worlds with superhuman beings, and yet they hold their own, and to my mind are much more interesting characters because of it. Their adventures usually happen at the street level, but they have also been integral parts of epic superhero sagas. They are super without having superpowers, and serve the function of relatability. They keep comics grounded in a/the realm of believability. We readers can’t really relate to Thor or Superman, but we can imagine being the Batman or the Black Widow.

Without further ado, here are my choices for the Top 10 Non-Powered Heroes.

An inevitable entry, I guess, and therefore I almost left him off the list, but, then I would’ve put someone else from the Bat Family on, like Huntress or Batwoman, which I would if it were a top 15 list maybe. I don’t think an explanation is necessary, though I will say I prefer him in his street level incarnations. Once he starts heading off to the moon in a spaceship to meet Wonder Woman and Superman, I start to feel like, Well, why doesn’t everyone else, like the U.S. Government, have a spaceship? I will also say here that I hate Superman. He’s too powerful, and so Frank Miller’s The Dark Night Returns is my favorite Batman storyline.

Recently the Panther became super-powerful, with the tech and money, the equivalent of Tony Stark (with even an Iron Black Panther suit like Iron Man’s) and in fact his country Wakanda became a superpower in world politics. But before all that (and now recently too, after he bankrupted Wakanda in a war with Dr. Doom and Latveria) he was just a guy in a suit. He first appeared in Fantastic Four, and did a stint in the Avengers early on, but I enjoyed his first solo run way back in the day, when the action took place in Wakanda, fighting off a pretender to the throne. Recently, when Daredevil left town, Black Panther came in to watch over Hell’s Kitchen, which was an interesting choice. Though with other DC and Marvel characters getting farmed out to other American cities, why not have a return to a superhero operating in Africa? Probably the first female comic character to imprint herself on my young brain, I’ve just always like her fierce independence. Unlike some female characters, there never seems to have been any doubt in any writer’s mind about treating her with respect. She was usually a side character, though at one point was leader of the Champions (remember them?) and the lover of Hercules. She fits in well as an Avenger, as a SHIELD agent, and as a renegade spy, though always with a code of honor, and some fierce loyalty to people who treat her right. I especially like the relatively recent solo run Black Widow Volume 2: The Things They Say About Her, written by Richard K. Morgan, with art by the awesome Sean Phillips. Morgan is just about the only writer in comics with the guts to actually talk about issues going on in our real world, and who better to take on the NSA than Black Widow?

Admit it, we all liked her even when she was an out-and-out villain. But we also knew even back then she was better, classier, than the Joker, Penguin and Two-Face. She has a soft spot for orphans, and now she’s a modern-day Robin Hood (hmmm, I keep coming back to that—note to self, article idea: Robin Hood, the first superhero?) robbing from the rich and giving to the poor. I’m all for that. Plus, she uses a whip. I know, I know, you’re going to remind me that DD has heightened senses that he got when spilled with chemicals in a vehicle accident, but hear me out: Long ago, when Frank Miller was writing him, Daredevil lost his heightened powers. In a famous, or to me unforgettable, issue, one that basically showed me as a young kid that comics could transcend mere entertainment to deal with bigger issues, Daredevil goes back to his old teacher, Stick, to re-train. And, by the end, he doesn’t regain his lost chemical-induced powers, but rather achieves a higher level of martial arts awesomeness which is equal to those powers. This detail was subsequently lost or suppressed or ignored in later DD incarnations, but I choose to still think of DD in his Miller incarnation.

Another lover/enemy/ally of Daredevil, though once she appeared, she was so overwhelmingly popular that Marvel gave her some solo runs. I think she’s actually died like, twice, by now, but Marvel keeps bringing her back (as they do, which is kinda annoying). The appeal of Elektra, like with a lot of the bad girl characters, is that she’s bad, had a shitty life, but still has some code of honor, and you’re rooting for her to come over to the forces of light. She’s the girlfriend you always wanted (or, I should say, that I always wanted): fiercely independent, not clingy, but passionate, and with her own life going on that she doesn’t need you around for.

Not the newer version, nor even the new new version of the New 52, nor especially the old old version where he was shooting arrows with boxing gloves, but the Oliver Queen of the 1970s and ’80s, where he wasn’t rich and able to hire the best marital arts trainers. No, this was just the guy who lived in a run-down apartment, and had lots of bills, but who nevertheless had the smarts and gumption to cobble together some cool tech arrows, and to hold his own in the JLA amongst the “gods.” Yes, and he even had the balls to call Superman and Batman “Supes” and “Bats” to their faces. 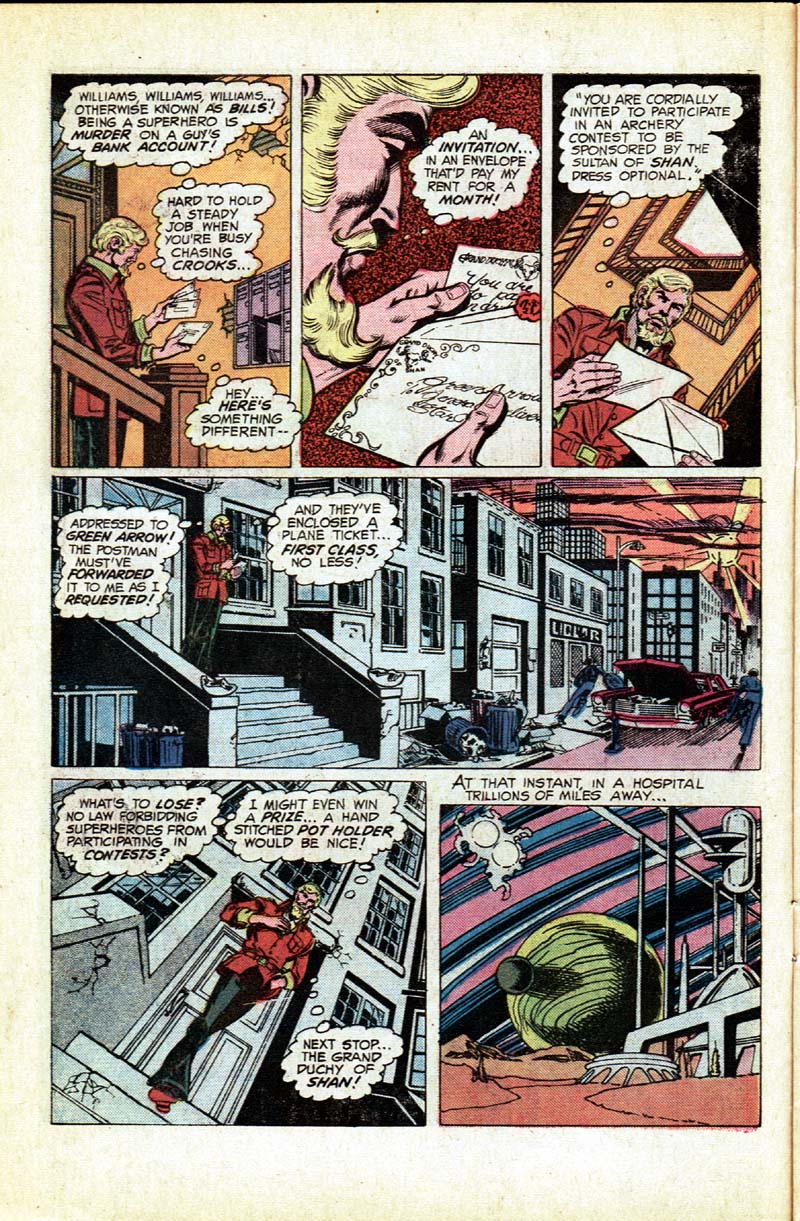 I love the bow and arrow, what can I say? There’s something primal about them, and mythological, going back to the English-speaking part of Western civilization’s greatest anarchist (in a good sense): Robin Hood, who himself is an incarnation of the mythical Green Man—part trickster, part hero — who appears in many European cultures. But actually, I like Hawkeye because, of all the Avengers, he’s kind of the fuck-up, especially now as he’s being written in his solo stuff.

Alan Moore shocked everyone when he had the Joker shoot Barbara Gordon, leaving her permanently paralyzed – or so we thought. What happened then was one of the better storylines DC has done. She came back and reinvented herself as Oracle, using her brains and photographic memory to serve as tech guru and hacker, as well as the leader of the Birds of Prey, redefining what a superhero was/it/could be. Of course, DC couldn’t leave in a wheelchair, and maybe the triumph of her physically rehabilitating herself worked for some readers, and Batgirl might have made it onto this list anyway, but now she’s back to being, merely, another bat-family member.

I know, using characters from Alan Moore’s Watchmen might not be fair, since the whole book is a meta-commentary on the superhero genre — or a meta-commentary on American culture using the superhero genre. I could have used Silk Spectre or Nite Owl on this list, but Rorschach to me is the key character in the series. I’m not even saying he’s likeable, but he has that uncompromising streak that I love, and which causes me to question my own uncompromising streak. I especially feel that at the end of the story (which I assume everyone knows by now), where everyone else seems to take the intellectual solution, i.e. lie, but Rorschach, of all people, argues from the heart, that people deserve the truth, no matter what. So, agree? Disagree? Who would be on your list? And why?