The reality that people have known all their lives is reintroduced when they experience some kind physical or emotional trauma that suddenly awakens that individual’s soul which takes shape of an animal, a Kri, and can all be find in Kri: The Unseen Essence.

Uriah Brown, 23, and Holly Brown, 21, launched Kri: The Unseen Essence (KTUE) on February 2, 2014. Uriah the Ohioan thought of KTUE’s first chapter when he was a high school sophomore in 2005. He says he was one of the few people at his school that liked Japanese anime like Shaman King and Dragon Ball Z which made him want to create his own manga. The 23-year-old shelved the idea when he realized he was not an artist.

Uriah later recruited Holly as the artist for Kri: The Unseen Essence. The 21-year-old says that character design is one of her favourite things and Uriah gives her essentially free reign over the appearance and personalities of all the characters. Holly says the two work quite well together since they balance each other out.

“See, I’m terrible at logistics. Making a comic is always something I thought would be cool, but I know myself too well and I’d never be able to advertise or update on time. That’s the kind of thing Uriah excels at, so I had a feeling we’d be the Dream Team if we could work together,” says Holly. 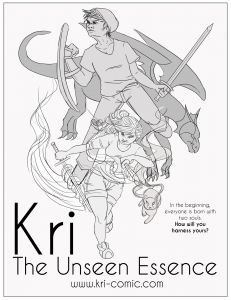 Above: Kri: The Unseen Essence flyer

Kri: The Unseen Essence is set in 2055 where Uriah only shares that technology has not progressed as much humans thought it would. The webcomic focuses on Kri which are second souls that people have existing outside their bodies, according to the KTUE artist. She says that everyone is born with a Kri but nobody has an idea until the individual is awakened or suffers some kind of physical or emotional trauma. Kri are based off of the person’s main soul personality and take shape of an animal and controls up to two elements. 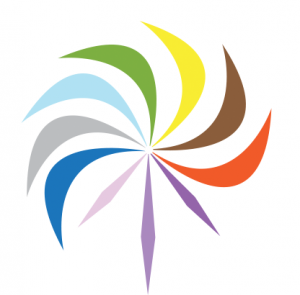 Above: The swirls represent elements while the purple shades represent alignments

Each Kri has their own element(s) and an alignment or where it stands on a moral compass. There are seven known elements as follows: Feri (fire), Weln (water), Wados (wind), Grod (earth), Druim (nature), Eles (Lightning), and Itsa (ice). There are also unknown and uncommon elements but readers should follow the KTUE to see the variety. A Kri also has one of three alignments Palan (light), Dorn (neutral), and Necros (dark). Unlike an element(s) that cannot change, an alignment in a Kri can but it depends on where the person morally stands. 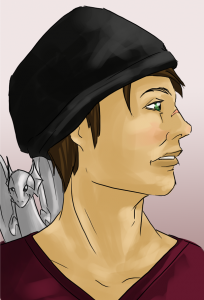 Above: Vincent and Felix

Some readers may find KTUE more relatable if they check the webcomic’s website page on how to find their own element and alignment.

“As for Grod, I’m also pretty sock-solid in my stances. I have that instilled sense of duty, honour, and trustworthiness that one can relate with unyielding attributes of earth and stone. I also get a bit stubborn. While I picture my Dorn-Grod Panda, his name is Gaius by the way, to be of earth, I always imagine more stone and rock than dirt and grass,” shares the 23-year-old. 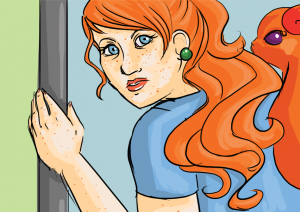 The 21-year-old says she identifies with a fennec fox because it is wily, energetic, and spunky not to mention it is her favourite animal. She loves nature and backs it up with being a counsellor at a Girl Scout Camp. The artist feels she is Palan because she believe she uses her talents in a positive way.

“For instance, [I like] drawing my campers a picture or writing them a personalized story. [sic] I was the Unit Leaders of a superhero-themed session, and I designed a two-hour long scavenger hunt where they had to use their superpowers to capture a villain. Stretching my mental muscles to get a smile is the most fulfilling thing imaginable to me. So in that way, I think Palan-Druim fits Athene the fennec fox perfectly,” says Holly. 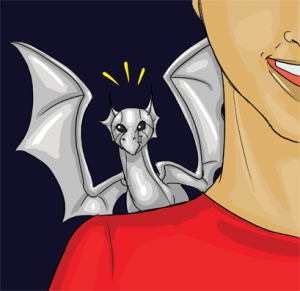 Kri: The Unseen Essence’s staff solely consists of Uriah and Holly. The former is in charge of writing the lore, outline the comics, and pushing out public relations activities like tweeting, etc. Each week, Uriah announces new comics on Monday and posts links via Facebook and Twitter. Throughout the week, he tries to tweet small things at people.

“Sometimes we get retweeted and we get a small spike in reader activity. I also try and post anytime someone submits fanart, [sic] have some announcement to make, or sometimes just to pose questions to our readers,” says Uriah.

The latter, Holly, is KTUE’s artist where she says she just gets to draw and put them in the “magical” Dropbox with Uriah uploading the art to the comic’s website. 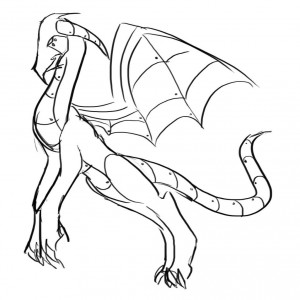 Above: Original sketch for Vincent

Like any work, the duo has a routine with how to go about their webcomic duties. The creators share a Google Drive document where all the writing takes place and where they pour in their chapter and plot outlines, musings, history, etc. Then, Holly looks at what next major event has to happen and draws it out sometimes going off one point like “Readers meet Tina” in the case of the Saving Grace Orphanage. She takes care of all the dialogue and places it where it needs to be once she has the entire strip drawn out in Photoshop. Holly then tosses it into Dropbox where Uriah reviews it and where he creates the word bubbles and official text. He then saves, uploads, and schedules the comic strip for Monday.

“By the time I get ahold of the strip, it takes me about 30-minutes. The art side all depends on how swamped [and or] motivated Holly feels that week, but I’m always excited to see that new comic appear,” says Uriah. 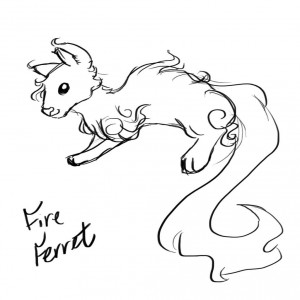 Above: Original sketch for Magmalene

The artist says the amount of time she spends drawing depends on the complexity of what she is trying to convey. Holly says if she has a good “chunk” of the day to work on the art she can take about four to five hours to produce a single, fully shaded strip.

Her KTUE art process begins with opening up what she wants to use as the strip and draws out a rough sketch of each panel to get her ideas together. Then she open a separate file what she calls her “work block” and she draws each individual panel. She says if the panel is more complex, she might have to do a red sketch before outlining in black. After she has a panel drawn out, she cuts it from the work block and pastes it into the strip where she scales it down to fit the parameters.

“Doing this gives the illusion of a more highly detailed image and thinner lines, when all it really is is shrinking it down,” shares the 21-year-old artist.

With Kri: The Unseen Essence hosting an array of animal-like characters, some readers may wonder how the webcomic’s artist decided the current art of the Kri. Holly says she has a few constants for what each element looks like such as purple eyes for Feri Kri or how Weln Kri has to float.

“I don’t want to put too many restrictions on appearance, since I would love to see the kinds of Kri out readers could come up with. I encourage everyone with all my heart to dream up what they believe their Kri looks like,” says Holly. 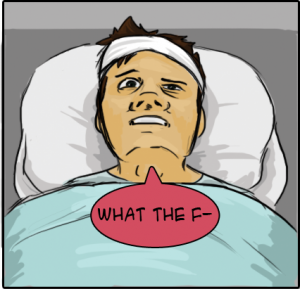 Uriah and Holly have not attended a convention but they have appearances planned for their first outings at SukoshiCon Bowling Green and Kentokyocon. The writer says he would love for the duo to attend Ohayocon,Ohio Comic Con, TsubasaCon, and Origins Game Fair.

Readers get an idea of what Kri: The Unseen Essence is about when its creators label their comic as action, fantasy, adventure, spiritual, and dystopian. The duo feels that KTUE is targeted toward young adults since it will have graphic violence and adult themes despite the “whimsical” idea of their webcomic.

The hardworking creators dream of an animated series for Kri: The Unseen Essence, physical volumes, a video games, and an active fan base. On top of of their future goals, the duo would like readers to take a lesson from their work and to enjoy it too.

“I want my readers to understand that no matter how terrible or hopeless a situation might feel or seem, there is always someone out there who can support and understand you. Sometimes we’re Felix – lost and struggling to comprehend. Other time we’re Stella – forced to be a leader and prompted to help our friends. If a reader can take away a sense of wonder and self-understanding after reading our comic, I’ll die a happy woman,” says Holly.

“I do want people to generally enjoy the comic. If people take with them an instilled sense of wonder and adventure, I’m happy at the end of [the] day. If there had to be a message though it would be not to always take the world at face value. Some things are deeper than they seem,” says Uriah.

You can find Uriah and Holly Brown’s other links below: