Halloween approaches. (m)Align yourself with the thriving local Horror community, sell your soul for their devilishly delightful goods, and drown your senses in tales from the Masters of Misery…

Some people start Christmassing in October. Turns out I like things getting Halloweenie in September. As has been the trend, this year’s Fan Expo in Toronto was happy to comply with my request for pre-season morbidity. There is a fiendishly healthy Horror community at the ever growing Fan Expo events in Canada. In the neighbourhood of scare-themed booths found in the Horror section and along Rue Morgue on the show floor, one can play with gruesome gadgets, pick out deathly decor, and stock up on supremely scary special effects. You can peek through your fingers at bloody art displays, join your own coven of writers, or bend your ear on the secrets told by masters of these dark crafts (we’ll drop in on Romero as any amateur horror buff would do, but you can pop in on the town hall discussion on Zombie Rights in the modern world, if you prefer). Artists create on-site monsters at their spray-paint booths, transform passers-by into foul-faced zombies at the make-up stations, and demonstrate real-life skills like walking on glass and lying on a bed of nails at the Sinister Sideshow Stage. Take a stroll with me through the exhibits to see what’s out there… you know… if you dare. 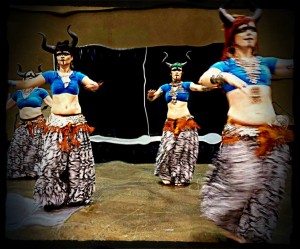 Satanic swiveling at the Sideshow Stage.

As soon as your feet step off the snaggle-toothed escalator, you can hear a devilishly rhythmic tinkling. The crowd undulates in the direction of music. Swallowing us up and spitting us out at the back wall. We stand in front of a small stage draped in black and a troupe of jeweled satanic hip-swivellers. Watching the belly dancing women with horns is mesmerizing and they’re wickedly capable of stealing a good deal of time. With the accompaniment of an eerily beautiful soundtrack, and surroundings full of severed limbs and possessed dolls, the exhibit creates just the right mood for getting morose. After trancing out to a few tracks, we’re finally distracted by a passing sound-bite…

“Have you even SEEN Sharknado?” The second man, looking like Poe dressed in an [insert ironic-phrase] t-shirt, shook his head and raised an eyebrow. “Pffft,” said the first t-ed up Poe, “Well don’t bother, ‘cause here comes… LAVA TURANTULA!” No one passes up such confident, science-backed conversation, of course, so we follow the two men to their booth. Turns out those interested in writing horror (or enjoying it) can come to Fan Expo to participate in genre workshops, screen new material, or join the community over at the Horror Writer’s Association. “A non-profit organization of writers and publishing professionals around the world, dedicated to promoting dark literature and the interests of those who write it.” They’re organized, prevalent, and their conversations are monstrously entertaining. You can check them out at a lot of the Expos, or peek in on them here.

Laid back stuff, at Casual Taxidermy.

Further down Rue Morgue, right on the corner of something dastardly and something freaky we happen upon a quaint Victorian setup with thoughtfully placed menageries and ornate metallic frames. The charming women at the booth smile warmly and welcome all to their nook to appreciate the displays. Of rats. Taxidermied. In prim outfits. On fainting chairs. Once sufficiently suppressing the PETA parts of the brain, one can see the charm and creative ingenue. Casual Taxidermy, they’re called. You too, can casually taxiderm animals into a period piece full of whatever miniature props strike your fancy. It IS an art and, you might assume, a labour of love (since the alternative might be some form of personal torture). Their curious goods and services are sold at Teta Kika. But, in these times of DYI, for all you crafters wanting to stuff something’s insides, there are one day lessons in amateur taxidermy though Casual Taxidermy. “An intensive hands-on lesson [where] you will transform a deceased rat into a unique and enduring art object.” Whether your motives are fun or revenge… I mean, it *could* end up being your thing… just, dress casual. Looking for something with a little less stuffing, a lot more skull, a little closer to 4 feet tall? Try the Mammoth remains over at Prehistoria. 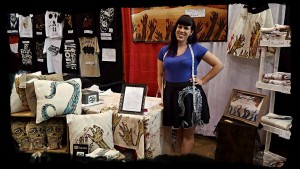 Everyone is clambering for It’s Alive Designs.

Doesn’t quite work with your current motif? Dotsy’s always has an impressive display of industry-standard FX products and costume materials to deck out your productions and top off your cosplay. Maybe you like to look clean though, and you like everything around you to be splattered in blood. Then Melissa Christie is the girl for your textile design needs. Kraken tentacles on your throw pillows? Zombie arms clambering up your duvet? She’s got your finishing touches over at It’s Alive Designs. And if you get worn down by the dead weight of all your shopping bags, be sure to pick up some coffee from Deadly Grounds, a Canadian operation owner Brad Mavin said came about because “No one told [him] it was a bad idea.” A downright clever one, I’d say. 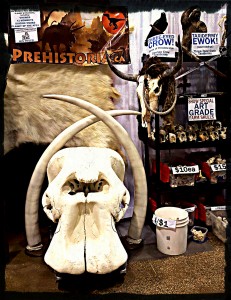 For all your skulling needs, Prehistoria.

Surely we’ve stumbled across the Expo’s pièce de résistance when we overhear a 12 year old boy yell “Mom! Don’t look, mom!” And the mother’s harried reply, “I know, son! Don’t worry! My back is turned! Let’s get out of here!” We’re surprised when the crowd parts and we catch a glimpse of the spectacle that’s sent a family fleeing from the horror section -it’s a thorny crowned Jesus cosplayer, and his open holey-hands, parted parched mouth, and face full of bloody rivlets is scaring away all the good Christians. Offended parties aside, we take it as an appropriate segue for heading down to panel to listen in on the classic scary stories, told by one of the fathers of fright, still revered by throngs of devout followers… 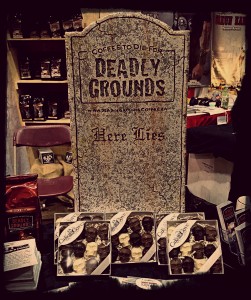 Blend in with some creepy consumables from Deadly Grounds.

Whenever good horror is on showcase, George R. Romero is close at hand (and it’s probably a decaying hand, grabbing up at your pantleg through the dirt on a grave). So close, in fact, that we bump into him in the hallway with his handlers just before the panel starts. “How is the Expo so far?” A tiny girl in large glasses asks him from behind her staff clipboard. “Oh fine.” George says, “It’s a bit crazy.” He stands just as sheepishly as she, but tall and willowy, in a passive yellow button up shirt, and a long, low-hanging, white ponytail. Once inside, Romero is recognizable from the furthest reaches of the room by the heavy black squares of his iconic eyeglasses. He speaks reverently of Wes Craven, who has passed away just that week, calling him so “very prophecerial and witty”. And he receives his own deafening praise as soon as the host first mentions Night of the Living the Dead.

Romero’s dead allow him to tell the stories that he wants to tell, without all the blowback. Using zombies was the path of least resistance to getting things made and to making sensitive points about humanity, he admits. George believes his zombies are “predictable, they don’t lie”. And as cleverly as that, he points out that the armies of dead are never the real villains in any of his tales.  He gets more animated as the panel delves further into his reanimated corpses, speaking with more energy which comes pouring out of his hands. 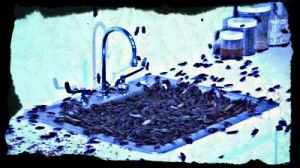 The real cheering is reserved for talk of Creep Show though, Romero’s only film to hit #1. In his gravelly, metered voice he recalls the canonized cockroach scenes, in which a bins full of live cockroaches are tipped over and filmed scattering to all the darkest crannies of the set. “In order to run,” George recalls, “they shit. It’s like fuel.” A captive audience howls with laughter. “What’s the sound of 250,000 cockroaches shitting?” He found out one day while shooting.

Back in those days, Romero said everything came down to rewrites. Don’t be discouraged, was his ultimate message. If you love doing something, just do it. When the higher ups would hand him back a script and tell him to make changes (which was constant), he would “rewrite the exact same script and throw in a couple of F.U.s!”

Don’t give up on your craft, is one thread uniting the Horrors at Fan Expo Toronto this year. You may start small, like the current collective of independent vendors on the show floor. But you can grow into a community like Rue Morgue when shown the right opportunities and alleys. Or you can create your own faction for others to worship, like Romero. Zombie speed-dating. Howling after-parties. Fortune-telling and workshop wisdom. However gory you want to get, however much blood you want to spill, you have an accomplice in the travelling dead of Ontario’s Horror industry and in the darkest recesses of Canada’s Fan Expos.

(Here’s a more indepth look at the horror exhibits found at Fan Expo and in the local Ontario community.)