Fan Expo is about the Fan Experience. That’s on the attendee as much as it’s on anyone else. Put on some comfy walking shoes and accompany me on a trek through this indulgent guide to attending big conventions.

The very first convention I ever attended was a Star Trek convention in Las Vegas. It was like transitioning from crawling straight into flight – a metaphor I choose specifically because I found the event exhilarating in a swept-of-my-feet kind of way. For everything else Vegas is, I appreciate it the most for the way in which it allows people to act upon their most base desires. To live out an aspect of their personality they may temper in the everyday. Sometimes that’s a laissez faire attitude towards domesticity, monogamy, responsibility. More interesting for me though, is when it’s about leaning full-tilt into a passion or self-expression. 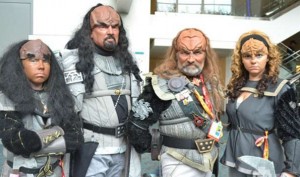 I have yet to be amongst a group of people more accepting and excited for each other as when I was at this Trekkie convention. Borgs excitedly sharing their makeup and cosplay techniques with fascinated attendees. Costumed families happily showing off their multi-generational Klingon bloodline while hanging out in the lobby. Chatty strangers in line for coffee. Friendly fans recalling historical panels. People making promises to meet again at future events. Everybody proud to be in attendance and happy for all others who made the trek to share in the experience.

There were mannerisms and lessons I learned there as a con-virgin that I have carried over to supplementary conventions to ensure optimal fun. Most importantly perhaps, I picked up on the attitude. The attitude that maximizes on positivity and minimizes stressors. It’s a disposition that allowed me to have 3 effortlessly fulfilling days at Toronto’s convention this past month. Fan Expo Canada is an inclusive, cross-genre event made to appeal to a burgeoning demographic (recently listed among the Top 10 Events in Canada: http://www.bizbash.com/fan-expo-canada-toronto-7-entertainment-industry-event-expo/gallery/148991). If you have the means to attend next year, I highly recommend stepping into this fantastical world. For the newbies and for those few strained voices and frustrated faces I saw speckled throughout an otherwise elated crowd this year, I thought to share some notions for an optimized experience. 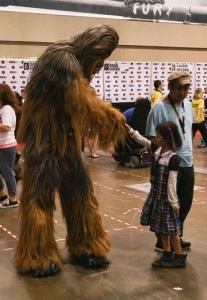 While attending a conglomeration of this magnitude, try to appreciate the amount of hard work and dedication that went into getting it off the ground. Expect it to be imperfect (and to have a capitalistic element). If you’ve ever created something or run an event, you know that there are obstacles. Be patient. Be humane. You’re not dealing with infallible beings here. You’re dealing with a group of individuals who are gathering together to make a livelihood, showcase their interests, and offer up a good time. A positive vibe (and a little understanding) is part of what makes a convention such a pleasure for vendors, guests, and fans to attend. Be part of the solution, not some radical precipitate weighing everyone else down.

Sometimes, the small actions make the biggest difference on the day as a whole. If you leave the house without a bottle of water, you’re not really prepared for the apocalypse. On top of that, you’re surely setting yourself up for a near-future complaint about the price and availability of bottled water when you get to any type of staged event. Even if they don’t allow drinks into the building, they likely allow empty containers which you can fill onsite. This is North America; the existence of water fountains and drinkable tap water is quite prevalent. Piggy-backing on this simple idea: pack a few snacks. You don’t have to get all super-gourmet. We all learned about snacks in kindergarten. Bring forth that knowledge, save yourself a few inflated concession dollars by packing whatever it is that’ll fill your belly on the go. This tip may also prevent you from having to leave lines to track down food, or from being a total jagweed to your surrounding peers because you’re hangry and unable to fit the food court into your itinerary.

Got an itinerary? Aren’t you clever. They have apps for a lot of conventions that breakdown things like scheduling, maps, vendors. Very handy, and a big drain on your phone. Don’t have a back up battery or a charger (I suggest bringing one) to plug in while you’re leaning on a wall waiting in line? Grab one of the event magazines. If you’re not toting around a purse or bag (I suggest bringing one) to shove it in, rip out a few key pages (map and schedule for the day were my choices) and stuff ‘em in your pocket. As for an actual itinerary, I prefer to go without one. I highlight the events I’d like to see and then I play the crowds once I arrive. Especially when dealing with Sadistic Saturdays… 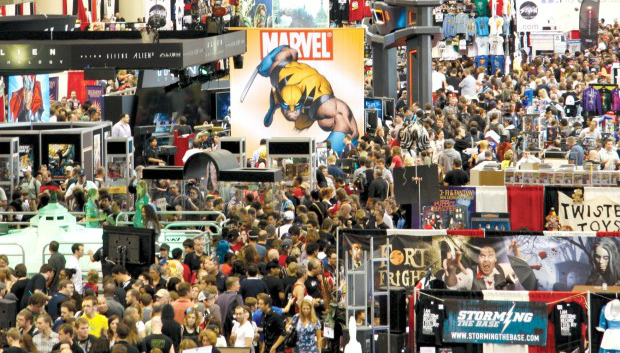 Saturday at any convention (and likely any weekend event) tends to be the most populated. If you’re only attending for this one day, good luck. Keep your chin up and expect everybody’s elbows to be jabbing at your sides. You’ll be running into a lot of abruptly stopped backpacks, skirting other people’s photo opportunities, and vying for the attention of someone who’s got what you desire, while being jumbled into a pocket of others who share the same wants. To avoid the very forecastable density of Saturday conventions, I look for activities and areas that will draw less people, and then I use them as sanctuary.

After shuffling through the Expo show floor at negative speeds, I check out some of the workshops in smaller convention rooms. They’re airy, light-hearted, plentiful, and listed in detail in the magazine and app. I can bounce between watching LARP battle royales to learning how to make my own steampunk jewelry. Checking out advanced screenings of Star Wars animation to attending a lecture on starting up a kickstarter campaign. Peeking in on what all the Bronies are so titillated by then ducking into a how-to on making your own horror film. An event of this magnitude is more than just celebrity panels and costume contests. Dip your toes in the lakes of other people’s passions, you never know what you may enjoy immersing yourself in.

Now’s a good time to pull out that water bottle to hydrate and grab a handful of trail mix. Let’s split up for some alone time and meet back here next week for Part II of this alphabet.